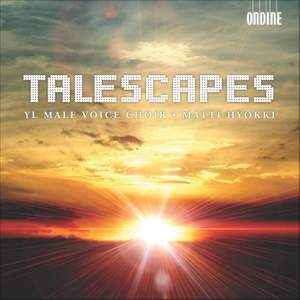 I. Yoton yo - Vita natter

This new recording features the Finnish YL Male Voice Choir, one of the world’s best-known male choirs, under its long-time conductor Matti Hyökki.

All featured works were commissioned by and written for YL. They reflect on life in all its shades, from exuberant joy in the Kanteletar Drinking Song to intimate sorrow in Lamentation.

Since its foundation at the Helsinki University in 1883, YL has continued to champion music written at its time, including numerous works written for the choir by Jean Sibelius and Einojuhani Rautavaara.