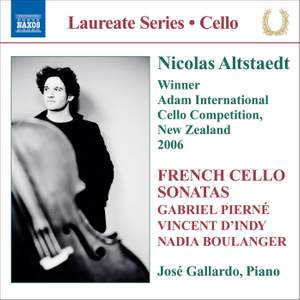 Pierné’s Cello Sonata was much influenced by the music of César Franck, while d’Indy shows a fondness for old French dance forms.

A student of Fauré, Nadia Boulanger made a particularly lasting impression as a teacher, exerting strong influence notably over a generation of American composers. Her Three Pieces move from gentle meditation to wild dance.