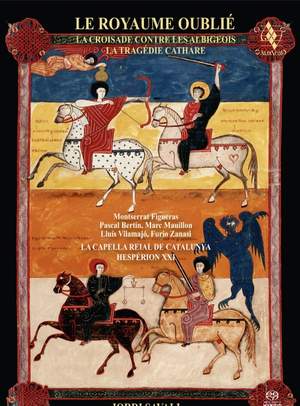 The Cathar Tragedy - The Albigensian Crusade

As is customary with Jordi Savall's projects, the album presents vivid theatre for the ear...The performances by La Cappella and Hespèrion are as magical as ever — BBC Music Magazine, April 2010, 5 out of 5 stars More…

trad.: Letter from Eberwin of Steinfeld to Bernard of Clairvaux – Recited text

Catharism was the name given to a Christian religious sect that appeared in the Languedoc region of Southern France and flourished in the 12th and 13th centuries. Catharism had its roots in the Paulician movement in Armenia and the Bogomils of Bulgaria with whom the Paulicians merged. The Cathars saw matter as intrinsically evil: they denied that Jesus could become incarnate and still be the son of God. The Catholic Church regarded the sect as dangerously heretical. Faced with the rapid spread of the movement across the Languedoc region, the Church called for a crusade, which was carried out by knights from Northern France and Germany and was known as the Albigensian Crusade. The anti-Cathar Albigensian Crusade, and the inquisition which followed it, entirely eradicated the Cathars. The Albigensian Crusade had the effect of greatly weakening the semi-independent southern principalities included in the area of Occitania, such as Toulouse, ultimately bringing them under direct control of the King of France. Occitania, which had the misfortune of being the collateral victim of the Albigensian Crusade, used to be the crossroads of many cultures: Arabic Al-Andalus, Northern France and Flanders, Italy and even Constantinople. From this melting pot emerged a very refined culture, which culminated in the troubadour tradition: it subsequently spread to Italy, Spain and even Greece. Under the influence of the troubadours, related new movements sprang up throughout Europe: the Minnesingers in Germany, trovadorismo in Galicia and Portugal and that of the trouvères in northern France. This album explores the ‘classical' period of the troubadour school around the turn of the 13th century, but also provides us with a comprehensive historical and artistic background of this Golden Age. It is time we remembered this ‘forgotten' kingdom from which so much Western culture evolved.

As is customary with Jordi Savall's projects, the album presents vivid theatre for the ear...The performances by La Cappella and Hespèrion are as magical as ever

Savall takes ownership of the more elaborate versions of the Joan of Arc songs...and his own playing is sublime. Montserrat Figueras and the other vocal soloists and readers deliver superbly vivid performances...Altogether an impressive and deeply fascinating achievement.