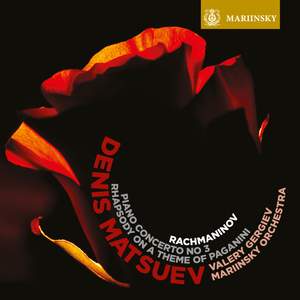 Rachmaninov - Rhapsody on a Theme of Paganini & Piano Concerto 3

Here, for once, is the level of artistry that the work needs...for all his seemingly endless reserves of technical power [Matsuev] never makes an ugly sound...Gergiev and his Marinsky Orchestra,... — BBC Music Magazine, April 2010, 5 out of 5 stars More…

Rachmaninov: Rhapsody On a Theme of Paganini, Op. 43: I. Introduction - Variation I - Theme - Variation II, III

The Mariinsky label’s fourth release features acclaimed Russian pianist, and Gergiev protegee, Denis Matsuev joining the Mariinsky Orchestra for recordings of Rachmaninov’s Piano Concerto No 3 and Rhapsody on a Theme of Paganini. Since winning the 11th International Tchaikovsky Competition in 1998 Denis Matsuev has established a reputation as one of Russia’s greatest and most dynamic pianists. Over recent years he has begun to perform regularly on the international scene and recorded for BMG Russia. He has appeared with many of the world’s leading orchestras and gave his first recital at Carnegie Hall in 2007. During 2010 he will perform the LSO, New York Philharmonic and Berlin Philharmonics as well as touring with the Mariinsky Orchestra and Gergiev in the US and Canada. He will also give further recitals at Carnegie Hall, the Concertgebouw in Amsterdam and Theatre des Champs Elysees in Paris. Matsuev is particular renowned for his interpretations of music by Russian composers and has collaborated with the Sergei Rachmaninoff Foundation to perform and record unknown pieces on the composer’s own piano at the Rachmaninov house Villa Senar in Lucerne.

Here, for once, is the level of artistry that the work needs...for all his seemingly endless reserves of technical power [Matsuev] never makes an ugly sound...Gergiev and his Marinsky Orchestra, too, contribute here on a level so far beyond routine that you would think none of them had played the work before

...Matsuev holds that most titanic of piano concertos in a passionate embrace, lavish with his rubato, devastatingly certain in his articulation, sensitive to colour and balance, aware of how to pace and thus make coherent the architecture of this massive work.

As one might expect from someone hailed as Horowitz’s successor, Matsuev holds that most titanic of piano concertos in a passionate embrace, Importantly, for all his physical power and energy, he never makes
a hard sound. There’s commensurately sympathetic playing from the Mariinsky, who also match Matsuev’s deft, vibrant musicianship in the brittler Rhapsody.