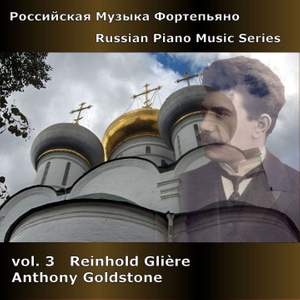 Reinhold Glière was born in Kiev and by 1913 had won fame both as a composer and conductor. For over 20 years from 1920 he was Professor of Composition at the Moscow Conservatory. He was probably the greatest musical survivor of his time – as well as being a highly respected teacher.

His music has characteristics of the style of Scriabin. The Preludes feature memorable melodies ranging from the virtuosic to the intense to intimate. They are considered to be the most important of Glière’s solo piano pieces – numbering over one hundred.

Described by The New York Times as “a man whose nature was designed with pianos in mind”, Anthony Goldstone is one of Britain’s most respected pianists. A sixth-generation pupil of Beethoven through his great teacher Maria Curcio, Anthony Goldstone was born in Liverpool. He studied with Derrick Wyndham at the Royal Manchester College of Music (which later honoured him with a Fellowship), later with Curcio in London.