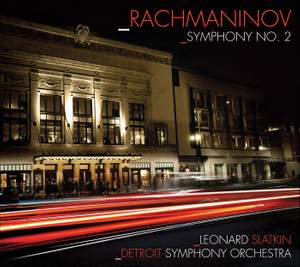 ...here is a performance warmed by musicians who clearly love this symphony. On the whole this is a very 'straight' account, Slatkin only occasionally 'point-making'...but generally his tempos... — BBC Music Magazine, June 2010, More…

In the wake of his First Symphony’s catastrophic première, Rachmaninov took a decade before commencing his Second, painstakingly revising it before conducting the triumphant première in 1908.

Although haunted, like his First, by the Dies irae chant melody, the Second Symphony brims with Rachmaninov’s revitalised assurance as a composer, from its brooding opening to the vigorous grandeur of its conclusion.

This disc marks the start of a new collaborative relationship between Naxos and the Detroit SO under Leonard Slatkin..

“One could argue that no conductor today comprehends this music or frames its rugged profile more eloquently than Slatkin. This was a magnificent performance, a testament to the DSO's collective virtuosity and a ringing promise of a new chapter in its annals.” Detroit News on Slatkin’s inaugural concert as the conductor of the DSO

...here is a performance warmed by musicians who clearly love this symphony. On the whole this is a very 'straight' account, Slatkin only occasionally 'point-making'...but generally his tempos seem so sympathetically chosen that the music speaks eloquently

Well-played and with a recorded sound that faithfully reproduces the distinctive blend of richness and subtlety in Rachmaninoff’s orchestration, the performance is pliable but unexaggerated, poignant and powerful...there is a genuine heart and soul to it as well.