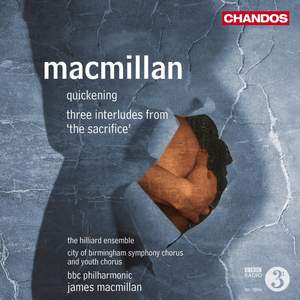 Chandos offers the world premiere recording of this theatrically and musically devastating opera commissioned and performed by Welsh National Opera. This is released on CD only, and not available to download.

The Sacrifice, described by The Scotsman as ‘a powerful and evocative piece of music’, is a compelling and timeless story of a ruler’s ultimate sacrifice to safeguard the future of his war-torn, faction-ridden country; a story of love, revenge and reconciliation, inspired by the heightened mythical world of the Welsh folk-tales collected in The Mabinogion. With hints of Tippett, Berg, Richard Strauss and the film music of Bernard Herrmann this opera evokes the late-romantic idiom, with a twenty-first-century twist.

The powerful cast of The Sacrifice reunites a number of artists who have received great acclaim for their recent roles with Welsh National Opera – and internationally: Sarah Tynan (who sang the role of Iphis in Jephtha), Christopher Purves, Peter Hoare, Leigh Melrose and Lisa Milne.

Further praise came from Western Mail: ‘There is no mistaking James MacMillan has a popular hit on his hands, with the cries of bravo as the curtain fell on the world premiere of his new opera… MacMillan also creates music of great beauty and the act two love duet between Siân and Evan is mesmerising as are the songs given to Megan, Siân’s child-like sister, sung exquisitely by Sarah Tynan… big, bold and audience pleasing.’

…Christopher Purves's anguished but dignified General, Lisa Milne's noble but tragically duty-bound Sian, and Sarah Tynan's weirdly touching Megan stand out, but there are no weak performances. The chorus, and particularly the orchestra of Welsh National Opera are magnificently on top of the music.

The close-set balance ensures that you can positively smell the greasepaint, while every word in Michael Symmons Roberts's libretto is crystal-clear...Invest in this bold set and you'll be rewarded with singing of unflagging stamina from a strong cast...Enthusiastically recommended.

...outstanding central performances from Lisa Milne as Sian...and from Christopher Purves as her father