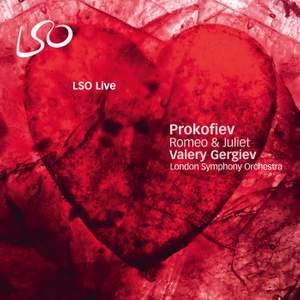 Few can rival Valery Gergiev's pedigree in Prokofiev's music, and he is palpably aware of how this score works in the theatre. His pacing of events is masterly, with plenty of verve and passion…... — BBC Music Magazine, February 2010, 5 out of 5 stars More…

Act I, Scene V, The Quarrel

Act I, Scene VI, The Fight

Act I, Scene IX, Preparations for the Ball

Act I, Scene XI, Arrival of the Guests

Recording of the Week,  Prokofiev's Romeo and Juliet

A ‘superb reading of Prokofiev's supreme masterpiece’ from Valery Gergiev and the London Symphony Orchestra, two decades after the conductor’s landmark account of the piece with the Kirov Orchestra.

LSO Live celebrates its 10th anniversary in 2010. The label's first release of the year features Prokofiev's spectacular score for the ballet Romeo & Juliet conducted by Valery Gergiev. Gergiev is a tireless champion of Prokofiev's music. In 2004 he conducted the complete cycle of the composer's symphonies with the LSO which then won a Gramophone Award. Shortly afterwards Gergiev became Principal Conductor of the LSO and spent much of 2008 and 2009 touring Prokofiev's symphonies with the orchestra in Europe, Japan and the USA. Gergiev's Mahler cycle continues in February 2010 with the release of the Fourth Symphony. Other upcoming releases on LSO Live include a Rachmaninov symphony cycle as well as music by Ravel, Stravinsky, Debussy and Strauss.

"The strings were supple and radiant … The brass, much used by Prokofiev, were tirelessly accurate, and the woodwind especially characterful, with some of the orchestra's younger members playing out of their skins. The best ballets contain music almost too good to be wasted on dancers. Freed from the need to adopt dance tempi, this wonderful music swaggered, sparkled and shimmered as it rarely does in the theatre" Mail on Sunday

"Most concert conductors only take bites out of Prokofiev's virile but lengthy ballet. Not Valery Gergiev. He knows that the complete score is a treasure chest of musical characterisation, orchestral colour, soaring melody and blasting drama: manna from heaven for himself and the London Symphony Orchestra" The Times

Few can rival Valery Gergiev's pedigree in Prokofiev's music, and he is palpably aware of how this score works in the theatre. His pacing of events is masterly, with plenty of verve and passion… what really impresses… is the tenderness and poetry that are so often overlooked in Prokofiev, and not just in the love music. Gergiev frequently lets the strings and solo woodwind linger in a beguiling, natural rubato, whilst maintaining an architectural grasp of the tragic whole.

Gergiev is in his element and not just in moments of gritty angularity or romantic excess. The lighter numbers, sometimes taken more spaciously than usual, are equally memorable.

The LSO play with real passion and energy throughout and every section of the orchestra is superb. The brass are rich and lyrical, noble and melodic or snarling and angry depending on the demands of the music, while the woodwind are on fine form throughout, commenting expressively on the action or portraying the emotions of the characters...All in all it is a superb reading of Prokofiev's supreme masterpiece, and thoroughly enjoyable throughout.

This is music in which Gergiev has few peers today...he brings an epic, symphonic and dramatic integrity to its vast, multifaceted canvas...his London forces respond to Gergiev’s often hair-raising volatility with some of their most dynamic playing

...the complete ballet is a treasure-house of wonderful music...in the hands of Gergiev and the LSO there is always a moment of delight around the corner. Wonderful for dipping into.