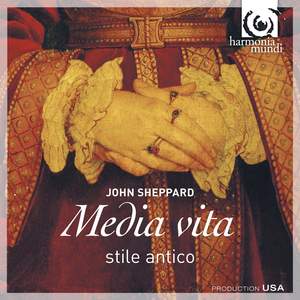 Performing editions reconstructed and prepared by members of Stile Antico

Sheppard, J: I give you a new commandment

For its fourth recording, Stile Antico spotlights the work of a neglected Tudor master: John Sheppard. The programme displays his genius across the range of genres in which he composed, including Catholic liturgical responds and hymns alongside simple English-texted anthems written in the reign of Edward VI. As its centerpiece, the great antiphon 'Media Vita' is a reflection on the frailty of human life and the hope for salvation.

Stile Antico is an ensemble of young British singers, now established as one of the most original and exciting new voices in its field. Prizewinners at the 2005 Early Music Network International Young Artists' Competition, the group is much in demand in concert, performing regularly throughout Europe and North America. The group's most recent release, Song of Songs, won the 2009 Gramophone Award for Early Music and reached the top of the US Classical Chart. Notable engagements in the 2009-10 season include a New York debut in the Music before 1800 series, appearances in the Spitalfields, Rheingau, Barcelona and Al-Bustan Festivals, and performances in France, Belgium and Estonia.

"Stile Antico is hot property nowadays and was hardly likely to turn down a gig at York - it was through taking part in the Young Artists Competition a few years ago that they got their break. ..Spanning more than two centuries of music, it was a programme of works by composers aware of their own mortality. …The highlight of the concert was John Sheppard's Media vita, a vast work, which was beautifully paced by the group - another motet that mirrored the great arching roof of York Minster's chapter house particularly well. This was a wonderfully homogenous sound: the ensemble sings through the phrases in such a way that gives direction while never appearing rushed." Early Music Today

The qualities which have earned Stile Antico international acclaim are intact: a glorious euphony, muscular line and nuanced dynamics illuminate the majesty of Sheppard's music...For listeners who revel in the beauty of English Renaissance polyphony, this disc is nothing short of perfect.

Whether the music be simple or complex, Stile Antico have the measure of it. Excellent!

Their purity of sound, with a fullness achieved by only 14 voices, reveals Sheppard's rich counterpoint. Despite this extraordinary finesse there's no self-conscious beauty, only intelligent, vital simplicity.

The Independent on Sunday 3rd January 2010

Stile Antico's recording has many attractive qualities. The first of these is a very lovely alto blend, which remains a constant in a programme that contrasts Sheppard's ecstatic Latin polyphony with the quiet simplicity of his English motets