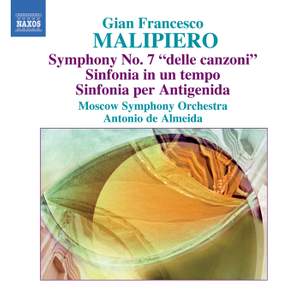 With its pungent harmonies and more complex structures the Sinfonia in un tempo (1950) belongs to a very different expressive and stylistic world from the symphonies of the 1930s and ’40s.

Named after an ancient Theban piffero player, represented by the work’s prominent piccolo part, the Sinfonia per Antigenida (1962) is perhaps Malipiero’s most inscrutable symphony, in which angular lines and aggressive dissonances reflect a bitter, disillusioned attitude to the world.