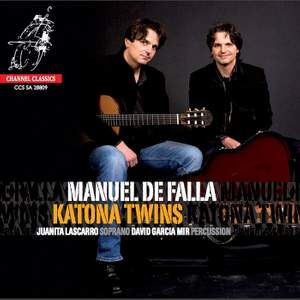 Works of Manuel de Falla - widely regarded as the most distinguished Spanish composer of the early twentieth century - are strongly influenced by Spanish folk music in which the guitar is central. Although he composed only one piece for that instrument his inspiration was flamenco and early Spanish music, including the guitar works of Gaspar Sanz. The guitar also features in Falla‘s first great success, the opera ‘La Vida Breve’. For this recording, we have selected and transcribed works in which the influence of the guitar was dominant thus translating these pieces back to their original source of inspiration. We felt that adding percussion would enhance the rhythmic element that is most characteristic for the music of Spain. We hope that showing De Falla’s work in this dynamic light will bring new audiences to his brilliant music.

Starring JUANITA LASCARRO, who made a spectacular British operatic debut as the heroine of Strauss' Daphne and continues to sing the coming season principal roles in many of the major European theatres.

"The twins Peter and Zoltán Katona have created a guitar duo noted for spirited interpretations, amazing virtuosity, and an uncanny ensemble that many attribute to their shared genetic heritage. The brothers from Budapest move and breathe together, and they mark changes of mood with an exchange of glances that highlights their musical decisions. And in their Saturday concert at Herbst Theatre, the Katona Twins united what had once seemed to be the irreconcilable opposites of Bream’s unbridled enthusiasm and Williams’ calm mastery. " SAN FRANCISCO CLASSICAL VOICE, 14 MARCH 2009