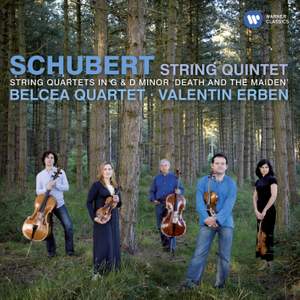 The traditionally ceremonial key of C major takes on a different hue in Schubert's Quintet. …the playing is on the loftiest level, ensemble always transparently clean; and the ability to think,... — Gramophone Magazine, December 2009 More…

“The Belcea Quartet throw every fibre of their beings into the most vivid projection of the masterpieces they undertake” (The Independent),

The Belcea Quartet has added three late masterpieces by Franz Schubert to their impressive discography on EMI Classics: the Quartet in D Minor ‘Death and the Maiden’, the Quartet in G Major D887 and the sublime String Quintet in C Major with Valentin Erben of the Alban Berg Quartet as the second cellist.

The Quartet in D minor ‘Death and the Maiden’ is one of two large-scale string quartets that Schubert composed in 1824. The subtitle refers to his famous song of the same name, the melody of which he used here as the basis for a set of variations in the second movement. The G Major Quartet of 1826 was the composer’s 15th and final string quartet. Its emotional and technical challenges were such that only the first movement was performed in public during Schubert’s lifetime and he was unable to find a publisher for it. The Quartet was first performed in its entirety in 1850 and was first published the following year.

The String Quintet in C Major dates from the last months of Schubert’s life, in 1828. The addition of the cello makes for a rich texture and powerful sound where needed but not to the exclusion of exquisite, soft, ethereal sections. Corina Belcea-Fisher, first violinist of the Belcea Quartet said, “It is a great challenge to capture all the varied emotions of the piece, emotions that can switch from one second to the next. It has been a great privilege for us to explore this work with Valentin (Erben), to be able to draw from his resources and his knowledge.”

From November 2009 until January 2010, the Belcea Quartet and Valentin Erben will make an extensive tour of Switzerland, France, Italy, Spain, Austria, Germany and Holland with a programme that includes the Schubert String Quintet. Their tour features a concert at London’s Wigmore Hall on December 10th.

The Belcea Quartet was established at the Royal College of Music in 1994 and has since been coached by the Chilingirian, Amadeus and Alban Berg Quartets. It is the Associate Ensemble at London’s Guildhall School of Music and Drama and Quartet in Residence at Bucharest’s Atheneum Concert Hall.

The Quartet’s engagements regularly take them to such prestigious international venues as Vienna’s Konzerthaus and Musikverein, Amsterdam’s Concertgebouw, Brussels’ Palais des Beaux Arts, Lisbon’s Gulbenkian, Zurich’s Tonhalle, Stockholm’s Konzerthuset, Paris’ Châtelet and Opera Bastille, Milan’s Sala Verdi, New York’s Carnegie Hall and Lincoln Center and San Francisco’s Herbst Theatre, and to festivals throughout Europe. In the UK they regularly appear at the Edinburgh, Aldeburgh, Perth, Bath and Cheltenham festivals, and at the Wigmore Hall, where they were the Resident String Quartet from 2001 to 2006.

The Belcea Quartet has recorded exclusively for EMI Classics since 2001 and won the Gramophone Award for best Debut recording that year. Subsequent recordings for EMI include Schubert quartets (E-flat Major D87, Quartettsatz D703, A Minor D804 ‘Rosamunde’), Schubert’s ‘Trout’ Quintet with Thomas Adès and Corin Long, Brahms’s String Quartet Op. 51 No. 1 and String Quintet Op. 111 with Thomas Kakuska, Fauré’s La Bonne Chanson with Ian Bostridge, a double disc of Britten’s string quartets, Mozart’s ‘Dissonance’ and ‘Hoffmeister’ quartets, and, most recently, the complete Bartók quartets, for which the Quartet was named Chamber Music Ensemble of the Year by Germany's prestigious Echo Klassik Awards and nominated for a 2008 Gramophone Award.

"The Belcea Quartet play with fire in their blood … their performances are never short of thrilling.” (The Scotsman)

The traditionally ceremonial key of C major takes on a different hue in Schubert's Quintet. …the playing is on the loftiest level, ensemble always transparently clean; and the ability to think, listen and prepare as a coordinated team results in an extraordinarily cogent performance sure in its grasp of phraseology, structure and dynamics. ...in the last 17 bars of the slow movement... absolute mastery over hushed tone, diaphanous texture and instrumental balance produces an awed stillness of time-stopping beauty. Here is technique fully subservient to emotional force not only in this movement, with its charged F minor middle section, but throughout the whole work. Throughout the other works too. ...Schubert's last quartet, in scope probably his greatest and most disquieting, ends in an Allegro assai finale where the Belceas underlines its message of discomfiture in a tour de force of icy intensity.

The Belcea’s urgent reading of the quintet’s opening (quicker and spikier than usual) establishes instantly the music’s deeply ambiguous character... The players, while alive to its beauties and sublimities, have no time for the old fallacy about the supposed light-hearted mood of the finale, which ends — rightly — on a note of violent tension. The obsessive rhythms and harmonic disruptions of both quartets are also vividly caught.

The Belcea Quartet's performances of all three works are beautifully judged and technically polished. There's something refreshingly brisk and business-like about their approach...but nothing is pressed too hard, and the pacing always seems natural.

This is Schubert played with heart-stopping freshness, the composer as romantic rather than classicist...Superb.