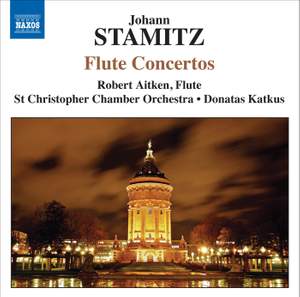 A pioneer in the development of the symphony, Johann Stamitz also composed several concertos, including fourteen for flute.

The four flute concertos presented here show what delightful results came from the combination of Stamitz’s lively musical imagination with the talents of the highly admired Mannheim orchestra’s players for whom they were written.

Virtuosity, lyricism and a dash of Bohemian spirit characterise these charming works, in which the emergence of the Classical style from its Baroque antecedents can be heard.