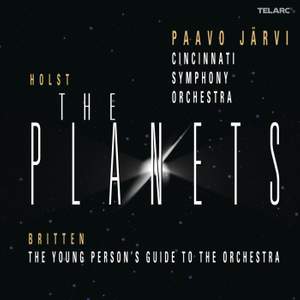 This latest recording by the Cincinnati Symphony Orchestra and its Music Director Paavo Järvi features two of the best known orchestral works to come out of England in the twentieth century, Gustav Holst's popular suite for orchestra, “The Planets” and The Young Person's Guide to the Orchestra by Benjamin Britten.

Composed between 1914 and 1916, Gustav Holst’s seven-movement Planets Suite is renowned for its brilliant orchestral colours, and powerful sound-images. The disc also features the re-issue of the orchestra’s highly regarded recording of Britten’s Young Person's Guide to the Orchestra. Originally released alongside the same composer’s Four Sea Interludes from “Peter Grimes” and Elgar’s “Enigma Variations” the review in The Gramophone said: “These are fresh, clean-cut performances, superbly played and vividly recorded, and can be warmly recommended to any collector.”

Paavo Järvi and the Cincinnati Symphony Orchestra’s 16 recordings for Telarc, including their excellent March 2009 release of Shostakovich’s 10th Symphony and Tormis’ Overture No 2, have garnered much critical acclaim. Other recent recordings include the January 2008 release of a celebrated all-Prokofiev CD, and the 2007 recording of Rachmaninoff's Second Symphony.