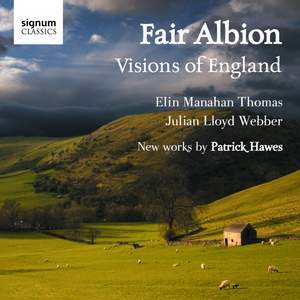 Hawes, P: After the Rain

Following his May release of Song of Songs (SIGCD162), composer Patrick Hawes returns with a new collection of works that celebrate the heart and soul of the British Landscape - with performances that bring together leading performers including Elin Manahan Thomas and Julian Lloyd Webber. Patrick Hawes debut album Blue in Blue stormed into the classical charts in its first weeks of release in 2004, and became the fastest and highest new entrant to the Classic FM Hall of Fame - leading to his subsequent appointment as composer in residence for the radio station. He has firmly established himself as one of England's most popular living composers.

Elin Manahan Thomas's lyric soprano voice provides the ideal vehicle for Hawes's neo-Baroque setting of George Herbert's The Call. Reflexionem for cello and harp is given a similarly uplifting treatment by Julian Lloyd Webber, solidly supported throughout by Claire Jones. ...the highly evocative Quanta qualia, which closes the disc, communicates a heartfelt honesty that speaks for itself.