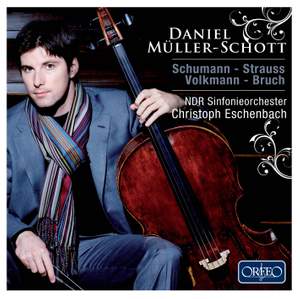 On his latest CD, Daniel Müller-Schott devotes himself to the cello's Romantic and late-Romantic solo concerto repertoire. It is a voyage of exploration that offers things both known and worthy of (re )discovery. After the Classical period, the cello fell out of fashion as a concertante instrument.When that changed again in the mid-19th century, it fascinated composers more than ever, and this in turn had an impact on their creative muse. For Robert Schumann, to be sure, the composition of his Cello Concerto was bound up with major disappointments - he himself did not live to hear its world première. But the concerto's interplay between soloist and orchestra is exciting, as are its contrasts between discretion and impulsiveness, and it is today well-loved by both audiences and interpreters and a firm feature in the repertoire. The dramatic aspect of the music comes as much to the fore here as it does in our recording of the Concerto by Schumann's contemporary Robert Volkmann. It is considerably less popular than Schumann's, but it thrives on singing, melodic themes and their sophisticated elaboration.These two concertos are complemented by two shorter pieces: Max Bruch's Kol Nidrei after Old Hebrew melodies, whose rich musical spectrum is savoured uninhibitedly and to the full by Daniel Müller-Schott, Christoph Eschenbach and the NDR Symphony Orchestra.Then there is the Romance in F Major for cello and orchestra by Richard Strauss, who despite his youth (he wrote it when 19) already offers us a hint of the originality of his later tone poems.

…really fine performance of Volkmann's Cello Concerto, a virtuoso showpiece in the grand manner, condensed into a fluid single movement form. Daniel Müller-Schott is a characterful advocate of the work, finding the fun in it and sharing this with Christoph Eschenbach and the orchestra in much delightful interplay. It's fiendishly difficult but Schott jumps through all its hoops with effortless panache.

Daniel Müller-Schott's mellow cello timbre and emotional sensibility are key factors in this warmhearted disc of four Romantic works...Even in the familiar pieces, Müller-Schott opens up fresh vistas of tonal shading and sincere expression...His phrasing is long-breathed, the paragraphs of music articulated with elegance and a restrained passion.