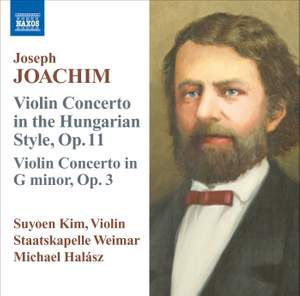 Joachim: Violin Concerto in one movement in G minor, Op. 3

A colleague of Mendelssohn, the Schumanns and Brahms, the virtuoso violinist Joseph Joachim was himself a composer of note.

His exuberant single-movement Opus 3 Violin Concerto from around 1851 was dedicated to Liszt, from whom he subsequently distanced himself. It is a tour de force by a highly gifted twenty year old.

Suyoen Kim is the Winner of the 2006 Hannover International Violin Competition. “Suyoen Kim plays with the technical brillance and musical maturity that have already brought her, at the age of 18, to the attention of conductors like Kurt Mazur and Seiji Ozawa.” The Strad