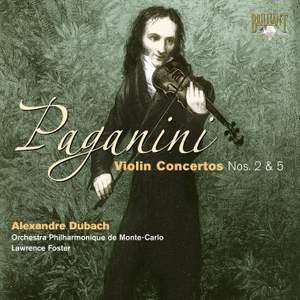 Paganini: Violin Concerto No. 5 in A minor

Paganini composed 6 numbered concertos; the 6th of 1815 actually pre-dates No.1, which appeared in 1817. The Second concerto became one of his most famous works, and one he performed most frequently. The famous finale known as ‘la Campanella’ became an instant hit from the premiere in Naples in 1827. Later that year Pope Leo XII created Paganini a Knight of the Golden Spur, and his international stardom continued. His playing unsettled and astonished Liszt that he retreated to his hotel room for two weeks and seriously doubted if he could become as good a pianist as Paganini was violinist. Schumann claimed that it was hearing Paganini play that jolted him out of his chosen career as a man of letters to become a composer. Paganini encouraged the stories that he had sold his soul to the devil in order to play so fantastically – such spin and hype was good for the box office. It did however result in the church refusing him burial in consecrated ground. Franz Liszt wrote an intensely personal and moving obituary when Paganini died in 1840.

The Fifth concerto is from 1830, and for many years was un-performable as all Paganini left was the solo part and some vague ideas as to scoring. It was reconstructed and scored by Frederico Mompellio who also scored the Sixth concerto in the 1970s from the violin and guitar reduction that had survived. The Fifth contains all the pyrotechnics expected of a concerto by Paganini, but the slow movement is an especially moving and unadorned Andante.

Paganini refused to publish any of his concertos, thus preserving control over them at a time when there was no copyright law. The first two concertos were first published in the 1850s, over 10 years after his death.