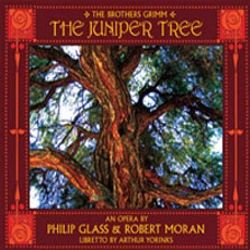 An opera by Philip Glass and Robert Moran

The Juniper Tree is an opera composed by Philip Glass and Robert Moran with a libretto by Arthur Yorinks, and is based on the tale by the Brothers Grimm. The opera was first produced in 1985 at the American Repertory Theater in Cambridge Massachusetts. This very grim story of death, rebirth, and love is accompanied by wonderful music. This collaboration between composers Philip Glass and Robert Moran yielded an incredibly lyrical and compelling score.

“The mood is more than sustained by the two composers, whose music dovetails remarkably well. Basically, Mr. Glass handles passages full of wonder and benign magic, and Mr. Moran takes the darker, more dangerous turns in the tale. But Mr. Glass has the mother's death, and Mr. Moran wrote the innocent celebration at the end.” The New York Times, 1985

The thoroughly capable singers and ensemble make a strong case for Glass's first opera to an English text.