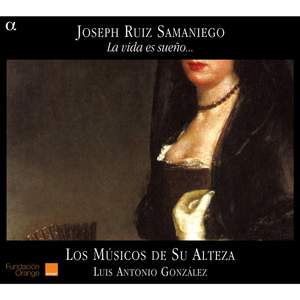 We know very little about Ruiz Samaniego, Kapellmeister in Saragossa during the second half of the 18th-century. However, he left an abundant music production, including some villancicos. These polyphonic vocal works of theatrical origin have been adopted by the Church to celebrate their main feasts. Sung in Spanish, not in Latin, they are built on a religious thematic, mostly in the form of dialogues and they frequently use musical elements of popular origin. Spanish Baroque vocal music is a world of many rich artistic treasures that cry to be rediscovered.The villancicos of Ruiz Samaniego are undoubtedly part of these treasures, as witnesses of an artistic universe specific to Spain, in which spirituality and sensuality are irremediably fused.