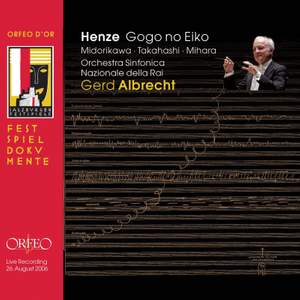 some of [Henze]s most beautiful and compelling music...Gerd Albrecht is a passionate advocate for the work...and the Japanese cast capture its claustrophobic world marvellously. The RAI Symphony... — BBC Music Magazine, May 2010, 5 out of 5 stars More…

First staged in 1990, Hans Werner Henze's opera Das verratene Meer is based on Yukio Mishima's novel Gogo no eiko (The Sailor who fell from Grace with the Sea) and harks back to the traditions of literary naturalism and the verismo of early 20th-century music theatre. At the suggestion of the conductor Gerd Albrecht, Henze prepared a Japanese version of the score that was performed for the first time in Salzburg in 2006. Under Albrecht's direction, the Orchestra Sinfonica Nazionale della RAI gave a sympathetic account of an iridescent score that ranges from exotic reminiscences of Japan to the impressions of a large city and from the atmospheric portrait of a doomed love story to a drama about juvenile violence, all of which strands are tightly interwoven right up to the moment of the final fatal confrontation in the closing scene of the opera.The cast includes three outstanding singing actors, the soprano Mari Midorikawa, the tenor Jun Takahashi and the baritone Tsuyoshi Mihara, all of whom create gripping portraits of the widow Fusako Kuroda, her 13-year-old son and the boy's stepfather.The recording affords further proof of the Salzburg Festival's ongoing commitment to broadening its repertory and to its desire to juxtapose the old and the new in thrilling ways that never compromise on quality.

some of [Henze]s most beautiful and compelling music...Gerd Albrecht is a passionate advocate for the work...and the Japanese cast capture its claustrophobic world marvellously. The RAI Symphony Orchestra reveals the many colourful nuances of this often shimmering score with aplomb.

This live recording of that production showcases a much tightened, more idiomatically alert work that benefits from Gerd Albrecht’s taut and tempered conducting and the coruscatingly poetic playing of the Orchestra Sinfonica Nazionale della RAI. Added authenticity comes from a young and largely Japanese cast.

...an often rapturously beautiful score...It's a slightly queasy mix of eroticism and violence, but what's striking about the score now is the tact and subtlety with which Henze presents it. The recomposed vocal lines seem totally natural with the new Japanese text, and under Albrecht the all-Japanese cast is convincing