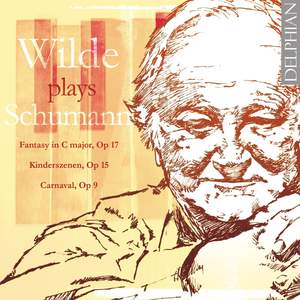 The first edition of Schumann's Fantasie in C has a number of differences from the edition more commonly used today. Most notably, at the top of the first movement "Throughout fantastically and passionately sustained", Schumann had originally written 'Throughout with violent feeling and continually free'. David Wilde has reinstated this and many other significant interpretative details resulting in a revelatory reading of this tumultuous love poem to the young Clara. In contrast, Kinderszenen, a touching and vernal evocation of childhood, is given a performance of artless innocence that chimes with Wilde's conviction that 'it shouldn't sound mature'. Carnaval's colourful cast of characters is viscerally and imaginatively brought to life, culminating in David's fearsome 'March against the Philistines'.

A veteran of the romantic piano tradition,Wilde brings seven decades of intense experience to this recital. His playing harks back to a time when audiences expected much more from the performer.This is Schumann with personality - listeners searching for a 'safe' experience will be disappointed.