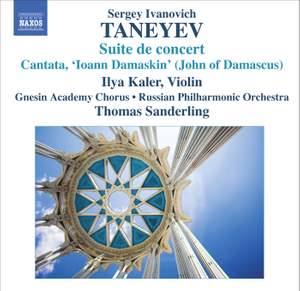 No vechnim snom poka ya splyu (But while I sleep with the eternal sleep): Andante sostenuto

V tot den', kogda truba (On the day when a trumpet): Allegro

Inspired by a poem by Aleksey Tolstoy, Taneyev’s cantata John of Damascus was the first work that the self-critical Russian composer deemed worthy of an opus number, its sublime music drawing on an ancient sacred chant woven into rich passages of expressive counterpoint.

A quarter of a century later, the virtuosic and scintillating Suite de concert, Taneyev’s first work for solo violin and orchestra, was also successfully premièred.