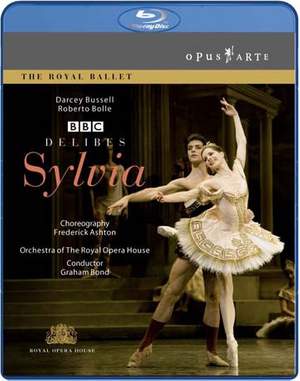 The Royal Ballet & The Orchestra of the Royal Opera House, Graham Bond

This DVD… shows the Royal Ballet at the top of its…form. …makes an imperious huntress and a commanding Bacchante — BBC Music Magazine, January 2008, 4 out of 5 stars More…

Note: This Blu-ray Disc (BD) is not compatible with standard DVD players

Darcey Bussell and Roberto Bolle star in Frederick Ashton’s Sylvia, restored to the splendour of its elegant and opulent three-act form for the 75th anniversary celebrations of The Royal Ballet. Taken from Greek mythology, it tells the story of Sylvia, loved by Aminta, abducted by Orion and eventually rescued by Eros. Ashton was inspired by the music of Delibes to create such great choreographic sequences as the famous Act 3 pas de deux and the mischievous role of Eros, one of the delightful, darkly comic characterisations for which Ashton became known and loved. Sylvia is a wonderful showcase for virtuosity, invention and classical beauty, the epitome of Ashton style in stage settings of great detail and painterly perfection.

Introductions and conclusion to the ballet by Darcey Bussell.

This DVD… shows the Royal Ballet at the top of its…form. …makes an imperious huntress and a commanding Bacchante

[Darcey Bussell] dances with perfect precision in the pizzicato divertissement and is ravishingly radiant in the pas de deux powerfully partnered by Roberto Bolle who also displays some soaring elevation as the shepherd Aminta. Mara Galeazzi has developed into an accomplished performer and shines as Diana with Martin Harvey providing a superb and mischievous Eros. It is gorgeous - do not miss it