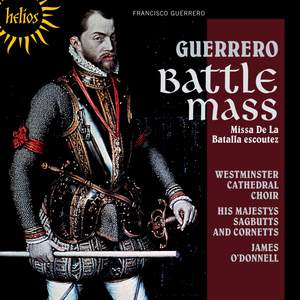 The Choir of Westminster Cathedral & His Majestys Sagbutts and Cornetts, James O’Donnell

These performances show that Guerrero deserves his anniversary celebration

James O’Donnell and the Westminster Choir have surely come up with another stunning winner. Hyperion and all involved in this record deserve a very special accolade

Despite his suggestive name, Guerrero's parody of Janequin's La Bataille de Marignan isn't the work of a fighting man: fanfares and alarums are definitely off the agenda while he develops, in an often rather sober manner, the smooth counterpoint of his model. Only in the 'Osanna' does Guerrero let rip, a moment seized on with gusto by the choir and His Majestys Sagbutts and Cornetts. Guerrero spent his career at Seville Cathedral, where the chapter was one of the first in Spain to agree to the establishment of a permanent, salaried wind band to participate in processions and at other points in divine worship.
It appears to have been one of Guerrero's duties to sort out what and when, and even how (scoring and ornamentation were part of his brief) the minstrels played.
The instruments (shawms, cornetts, sackbuts, dulcian and organ) subtly double the voices, adding depth to the sound, and strengthening major cadence points. Particularly striking is the earthy tone of the bajón (dulcian) reinforcing the bass line in proto-continuo fashion. In fact, it's in the other items on this CD that the combination of voices and instruments really comes into its own. The setting of the psalm In exitu Israel experiments with Guerrero's forces (including cornetts and recorders), resulting in an opulence of sound more readily associated with Venetian music of the period. But this isn't just an exercise in applied musicology. These are well-paced, intelligent performances that get inside the skin of Guerrero's marvellous music. Don't be surprised to find yourself humming the Spanish chant for the hymn Conditor alme siderum after this compelling rendition. The musicianship is superb, the technical element entirely satisfactory and satisfying.

Anniversary CD of the year—and my personal favourite

Throughout the disc the eloquent singing, very well balanced and never overwhelming the brass choir, makes this a varied and highly enjoyable introduction to a remarkable composer.