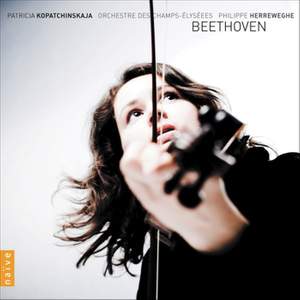 Patricia Kopatchinskaja's warmly recorded account of the Beethoven Violin Concerto must be one of the most stimulating and provocative that has ever been committed to disc. She opts… to interpret... — BBC Music Magazine, December 2009 More…

Award-winning Moldovan violinist Patricia Kopatchinskaja presents a new vision of Beethoven’s complete works for violin and orchestra. She is accompanied by the Orchestre des Champs-Élysées under the direction of esteemed Belgian conductor Philippe Herreweghe.

The release offers us fresh insights into Beethoven’s Concerto for Violin and Orchestra in D major, op.61 based on historical evidence, using period instruments. Kopatchinskaja contributes her own adaptations of Beethoven’s original cadenzas for the piano version of the concerto. The Romances are performed here in a simple, lyrical style typical of the slow movements of late 18th-century French violin concertos. Alongside the Concerto and the Romances, the recording features the rarely recorded Fragment: the only known part of an unfinished Concerto in C major.

Kopatchinskaja’s first CD on Naïve last year, a recital with Fazil Say, received sensational reviews and was awarded the Excellentia Award of the Magazine "Pizzicato" (Luxembourg), as well as the ECHO-Klassik award 2009. Earlier this year, she was heard performing Fazil Say’s colourful violin concerto, ‘1001 Nights in the Harem’, also on Naïve (V5147).

Patricia Kopatchinskaja's warmly recorded account of the Beethoven Violin Concerto must be one of the most stimulating and provocative that has ever been committed to disc. She opts… to interpret the solo part with a very light, almost wispy sound, using a fluid almost operatic style in the recitative passages that follow the big orchestral tuttis. Superbly supported by Philippe Herreweghe and his expert period-instrument orchestra, she maintains a flowing tempo throughout each movement, yet is sufficiently flexible in her playing to accommodate rubato in the most expressive parts of the work.

The period orchestral sounds are vital; the flowing tempos are close to Beethoven’s metronome marks; Kopatchinskaja’s character, her soaring sound and improvisatory flair are compelling, and ultimately highly musical...Kopatchinskaja has something genuinely individual to say about this much-loved and recorded masterpiece