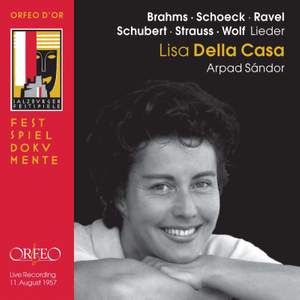 Although Lisa Della Casa sang in many operas in Salzburg, she gave only a single lieder recital: in 1957 in the Grosser Saal of the Mozarteum, accompanied by the Hungarian pianist Arpad Sándor, esteemed chamber music partner of musicians such as Fritz Kreisler and Jascha Heifetz.Anyone who had not expected lieder to be a speciality of this lyric soprano would soon be disabused: with the incomparable clarity and simplicity of her melodic line and her precise and unaffected articulation, Lisa Della Casa excelled with touchstones of the repertoire by Schubert and Brahms. She also honoured her compatriot Othmar Schoeck (who had died the previous spring) with her performance of two lieder from his new setting of Goethe's singspiel libretto Erwin und Elmire. She also included in her programme three of the Chansons populaires by Ravel, 1957 being the 20th anniversary of his death. Naturally, she concluded her recital with a group of lieder by Richard Strauss, the composer with whose works her name is still most associated.A unique delight made available to the modern audience thanks to this Orfeo recording.