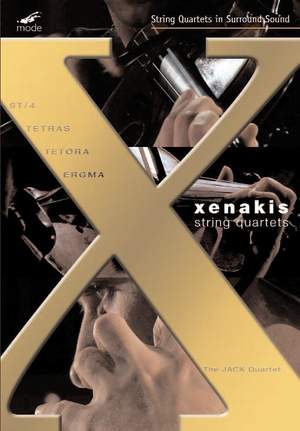 The first complete recording of Xenakis' string quartets, recorded in surround sound with full video.This body of work represents one of the most important contributions to music for strings of the post-World War II era.

The first new recording of Xenakis' first three quartets since 1994.

The only available recording of Xenakis' last quartet, 'Ergma', from 1994.

The first commercial release by the JACK Quartet, a young New York/Boston based group that has been garnering high praise for their performances of complex and challenging new music.The members of the quartet met while attending the Eastman School of Music, New York.The quartet has since studied closely with the Arditti Quartet, Kronos Quartet, Muir String Quartet, and members of the Ensemble Intercontemporain.

Surround Sound: the studio recording process was dynamically captured by a multiple camera shoot. Each quartet is given its own visual treatment. Directed by Tim Chu

“ I would never have expected to see a crowd at a downtown nightclub erupting with whoops after performances of four hypercomplex, cutting-edge string quartets by Iannis Xenakis. But in this setting these dense and kinetic works came across to this open-minded audience as just more hip, wild, out-there contemporary music." The New York Times, Sunday, December 21, 2008