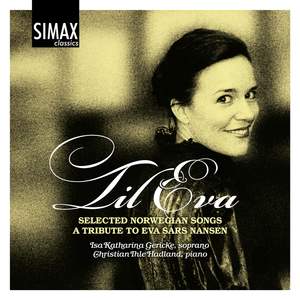 a tribute to Eva Sars Nansen

Theodor Kjerulf: 'Vidste Du Vei' ('If You But Knew The Way')

Kjerulf: Over De Høie Fjelde, 'Undrer Mig Paa, Hva Jeg Faar See' (Over The Lofty Mountains, 'Wonder I Must, What I Once May See')

The songs performed on this CD by the soprano Isa Gericke and pianist Christian Ihle Hadland were written by three composers who were at the forefront of the national musical movement, Agathe Backer Grøndahl, Halfdan Kjerulf and Rikard Nordraak. They are dedicated to Eva Sars Nansen who pioneered the performance of the Norwegian lieder tradition.

Practically unknown today, Eva Sars Nansen was one of the most important pioneers in the performance of the Norwegian lieder tradition. She was also the wife of the arctic explorer, scientist and humanitarian Fridtjof Nansen. In the period leading up to the dissolution of the union between Norway and Sweden in 1905, the Nansen group ‘Lysakerkretsen’, which included among others Hulda and Arne Garborg, was important in outlining the unique cultural heritage of Norway.

Based in Berlin, Isa Katarina Gericke has been acclaimed for her performances on opera stages and in recitals, most recently at the Wigmore Hall in London. Christian Ihle Hadland is a sought after soloist and chamber musician on an international level.