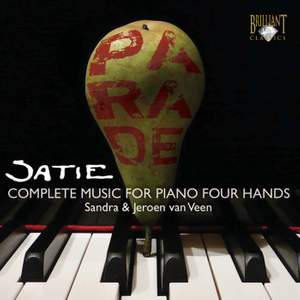 Alfred Erik Leslie Satie (1866–1925) was born in Honfleur, of a Normand father and a Scottish mother. He rates as one of music’s true originals – a real ‘one-off ’. After his studies as an organist, and then a period as a rather unsuccessful concert pianist having studied with several eminent teachers (he hated the rules of academic life), he enrolled in the French Army. This didn’t solve his problems with life either, so he deliberately contracted bronchitis and was invalided out after being declared unfit for service. It was after this sad episode that he started to compose, and his earliest published work was Valse-Ballet. Satie then entered the life of Parisian nightclubs, absorbing all the influences of sound and life on offer, becoming friends with Debussy – they met when Satie had got a job as second pianist at a club. Satie had developed a unique way of composing – a kind of musical freehand – and was introducing complex chord structures that would come to influence Debussy. His music attracted the attention of such leading figures as Diaghilev, Picasso, Ravel, Stravinsky and Cocteau. Even so, Satie had a feeling that he wasn’t being taken seriously as a composer, and embarked on a three-year counterpoint study with Albert Roussel. The piano four-hands form has a long and distinguished history with many major symphonic works by Brahms, Rachmaninoff and Stravinsky published in this form for a wide domestic market. For many years the great classical composers’ works had appeared in this form, including works by Mozart and Schubert, who wrote specifically for piano four-hands.

In the days before LPs, CDs and MP3s this was how music was heard in the home. This CD contains some of Satie’s most important works – Parade, written for Cocteau, Relâche, Gymnopédies Nos. 1 and 3, and his so-called ‘Furniture music’, Musique d’ameublement of 1917.

Piano Duo Sandra & Jeroen were established in 1987, and since then have toured extensively.

They have also made over 40 CDs. They teach, adjudicate, and have a passion for bringing music to unusual locations such as railway stations!