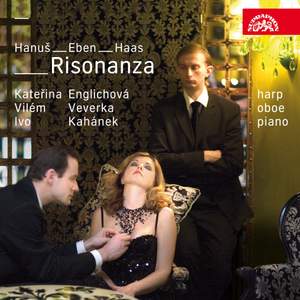 Hanus: Trio concertante for Oboe, Harp and Piano, Op. 59b

The three composers featured on this CD could be summed in a single word – “recalcitrant”. The creative path of the oldest of them, Pavel Haas, probably the most talented of Janácek's pupils, ended very early – due to his Jewish origin – in Auschwitz. In 1939, when he was completing his Suite, Europe began to be the scene of events that would ultimately result in its 40-year division into East and West.

The other compositions contained here already originated behind the “Iron Curtain”, where the composers Petr Eben and Jan Hanuš, closely observed and barely tolerated by the communist regime – both too spiritual and too liberal-minded for their time – lived most of their lives. Hanuš’s Trio concertante is presented on this CD in world premiere and it is difficult to imagine more fitting and devoted interpreters. Katerina Englichová, Vilém Veverka and Ivo Kahánek are among the very best Czech soloists, with a great absorption and grounding in 20th-century music.

These outstanding young interpreters aim to prove that works by Haas, Eben and Hanuš can within their genre be compared with the best compositions that were created at the same time in Western Europe.