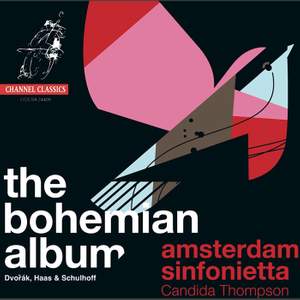 …entertaining enough, especially when played with the cheerful abandon it is here. — Gramophone Magazine, January 2010

III. The moon and I

Amsterdam Sinfonietta has combined a romantic masterpiece of the string orchestra repertoire with two wild compositions from the inter-war period. Dvorák, Haas, and Schulhoff hardly make a conventional mixture, but all three of these composers had their roots in a region which was known for many centuries as “Bohemia.” One can hear this common ground in the rhythmic diversity, the influence of folk music, and the melodic inventiveness that characterizes their music.

Amsterdam Sinfonietta occupies a unique position on the Dutch music scene as professional string orchestra. It is regularly invited to perform in concert halls throughout the world as one of the very few large-scale string ensembles on the international scene. What sets Amsterdam Sinfonietta apart from the ‘regular’ chamber orchestras is the top priority it gives to a ‘chamber music mentality’. Every one of its musicians assumes the responsibilities of a solo player. This approach gives a high level of involvement on the part of the musicians when they perform as an ensemble, resulting in performances of rare dynamism and intensity that involve the listener in a vibrant live music experience. Usually the ensemble plays without conductor under the direction of Candida Thompson, concertmaster since 1995, who was appointed artistic director in 2003.

The Amsterdam Sinfonietta’s Walton/Beethoven disc CCSSA23005 was a Gramophone Editor’s Choice in 2005.

…entertaining enough, especially when played with the cheerful abandon it is here.