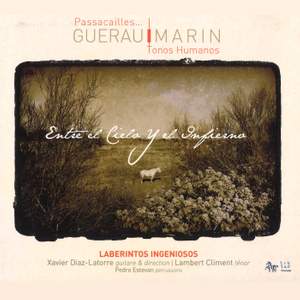 As the Habsbourg were losing the indies, flandres, Italy…as the Golden century was glimmering his last stars… The arts entered a period of pessimism and disillusionment, made of scorned loves, tales of cloak and dagger… expressed through satirical or moralising poems, turned into courtly or theatrical songs.

The Tonos Humanos, only known piece of José Marin stands, with poetry of Lope de Vega… are made of great musical originality: madrigalism, chromatism where the harmonical role of guitar is outstandingly developed.

“I have structured the programme in three ‘days’, because this is the virtual period of the action of the seventeenth-century plays with which this music is so closely linked. Let us hope that the beauty of these tonos humanos will encourage stage directors and producers to include them in their future adaptations of Spanish classical theatre, so that they may be restored to their rightful place.” Xavier Díaz-Latorre