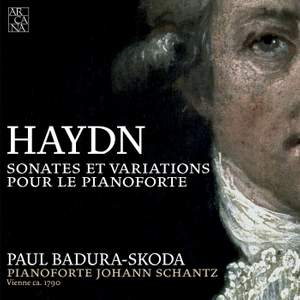 Despite, indeed partly because of the imperfections there is an immediacy and intensity here as his 81-year old fingers feel their way from one musical configuration to another that is in a class... — BBC Music Magazine, January 2010, 4 out of 5 stars More…

The legendary Viennese pianist, Paul Badura-Skoda, has issued a new recording of five piano masterworks by Joseph Haydn, for the bicentenary of his death. Johann Schantz's fortepiano from Badura-Skoda's collection, is the most appropriate instrument available today for interpreting Haydn's music. In a letter to Marianne von Genzinger dated 4 July 1790, Haydn refers to Johann Schantz as "the best pianoforte maker". In the late '80s and early '90s Paul Badura-Skoda recorded a small collection of four single volumes on the same instrument, with Michel Bernstein and for Astrée. The booklet contains notes (in four languages) by Badura-Skoda himself. In 1945, Badura-Skoda entered the Vienna Conservatory, and two years later won a scholarship which allowed him to study with Edwin Fischer. In 1949,Wilhelm Furtwängler and Herbert von Karajan became aware of his outstanding talent and invited him to play and practically overnight he became world famous. Since then, Badura-Skoda has been a regular and celebrated guest at the most important music festivals, and a soloist with the world´s most prestigious orchestras, recording a vast repertoire: more than 200 LPs and dozens of compact discs including the complete cycles of the piano sonatas of Mozart, Beethoven and Schubert. He performs with equal authority on both period and modern instruments and was a pioneer in proposing the use of period pianos in perfomance.

Despite, indeed partly because of the imperfections there is an immediacy and intensity here as his 81-year old fingers feel their way from one musical configuration to another that is in a class apart from the well-engineered perfection of those younger players. Wayward, even bumpy through the unfolding of the exceptionally lovely slow movement of the Sonata in A flat may sound, the underlying grasp of direction and cohesion is all the stronger. One is compelled to listen.