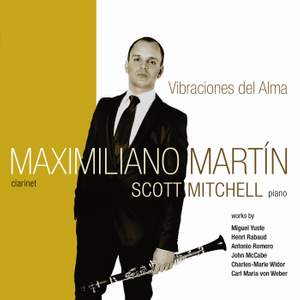 Languorous and brilliant by turns, this star clarinettist's recital is a delight.… — Gramophone Magazine

Together with pianist Scott Mitchell he explores the diversity of European clarinet repertoire and presents a captivating selection of music from composers such as Yuste, McCabe and Romero.

Liverpool-born composer John McCabe personally advised Martín with regard to his performance of Pieces for clarinet and piano for this recording, resulting in an insightful and authentic performance.

Charles-Marie Jean Albert Widor’s trademark virtuosity is evident in the Introduction and Rondo, Op. 72. Martín more than meets the demands of the great contrasts of beautifully lyrical phrases and technically complex bravura passages.

Martín won the Young Artists Platform Competition in 2002 and has since performed in the most important concert halls and international festivals establishing himself as one of the most talented and charismatic musicians of his generation.

Martín already has many fans as the popular Principal Clarinet for the Scottish Chamber Orchestra and has built an enviable reputation as a soloist with acclaimed performances in his birthplace Tenerife and throughout Europe.

“Vibracones del Alma” is a well-planned programme of some of the best European music for clarinet, played to perfection by Maximiliano Martín accompanied by Scott Mitchell on piano.

Languorous and brilliant by turns, this star clarinettist's recital is a delight.…