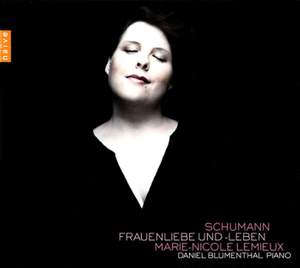 Lemieux brings a highly individual timbre to her Schumann recital...If you respond to her chocolaty tones, then you may want to investigate further...The rarely performed Die Löwenbraut...is... — Gramophone Magazine, April 2010 More…

No. 4. Du Ring an meinem Finger

No. 7. An meinem Herzen, an meiner Brust

Critically acclaimed Canadian contralto Marie-Nicole Lemieux, who records exclusively for Naïve, releases her second solo recording for the label featuring a selection of fine lieder and two major song cycles by Schumann. She is accompanied by American pianist, Daniel Blumenthal.

Following her critically praised debut solo CD of French mélodies (L’Heure exquise) multi-award winning Canadian contralto, Marie-Nicole Lemieux, returns with her second eagerly anticipated solo album on Naïve. Acknowledged as one of the foremost interpreters of her generation in the Baroque and Romantic repertoires, Lemieux ventures into the wonderfully passionate and poetic world of Schumann lieder.

The programme opens with the stunning song cycle, Liederkreis Op.39. Written in May 1840, the cycle comprises of twelve songs based on poems by Joseph Eichendorff. Though the cycle presents no intelligible narrative framework, the result is a cycle that is completely coherent, almost a dream, a masterpiece on a par with Schubert’s Winterreise, consisting of a legendary ballad, mysterious nocturnes, meditations on love, and surges of passion: Romanticism at its best! Two months later, Schumann composed Frauenliebe und Leben Op.42. The songs describe the successive stages in a woman’s life: Her first love, engagement, marriage, motherhood to the continuation of her love for her husband after his death. This very intimate cycle often expresses happiness tinged with sorrow and a feeling of tragedy pervades the work, even amidst the joys of marriage. Marie-Nicole Lemieux’s dramatic qualities suit this cycle perfectly. To complete this programme of pieces by Schumann, Lemieux has chosen some other songs by the composer – Stille Tränen, Die Löwenbraut, Loreley, Er ist’s, Widmung,Der Nussbaum – perfect for her warm contralto voice.

Lemieux brings a highly individual timbre to her Schumann recital...If you respond to her chocolaty tones, then you may want to investigate further...The rarely performed Die Löwenbraut...is a treat, and the highlight of the disc.

This is a rare voice of melting loveliness, warm, limpid and rich-toned throughout its range, yet entirely devoid of the stately hootiness traditionally associated with the contralto...Lemieux sings the words clearly, yet without overpointing the text, and finds a different vocal “face” for each song. A revelation!

In Frauenliebe und Leben the reticence of both performers pays off. Lemieux's matter-of-fact, deliberately unhistrionic presentation is very touching, so the emotional arc of the cycle clearly emerges without any seeming effort at all.

Canadian contralto Marie-Nicole Lemieux and pianist Daniel Blumenthal bring vivid perception to Schumann's song-cycle Frauenliebe und-Leben, Op 42. It's tempting to judge this work by the ardent second song, "Er, der Herrlichste von allen". Lemieux passes with flying colours, her timbre dark but gleaming, her adoration for the love object kept in check and never cloying. Vibrato, too, is not overdone

Lemieux is clearly a thoughtful musician and she sings with a warm well-focused tone.

The Independent on Sunday 19th July 2009

The strongest performance in this Schumann recital with pianist Daniel Blumenthal is Die Löwenbraut, more scena than song. There are some enticing moments in Liederkreis…