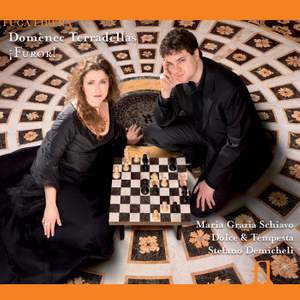 Domènech Terradellas, born in Barcelona in 1713, finished his studies in Naples, with Durante amongst others, and became one of the most popular composers of his time. His operas rivalled those of Handel, Hasse and Jommelli and were to be seen on the major stages of Rome, Naples, Florence,Venice but also London, and his name was revered as a model for good taste by Rousseau and Burney. After his premature death in 1751, the Catalan composer fell into oblivion and it is only recently that first class interpreters have showed an interest in him once again. Fuga Libera present here a world première of excerpts from two of his finest operas, Merope and Sesostri, re d'Egitto and from Artaserse, recently premièred on RCOC, starring the sublime Maria Grazia Schiavo, most recently heard on Glossa's Italian Cantatas series, admirably accompanied by the Dolce & Tempesta Ensemble under the baton of its director and harpsichordist Stefano Demicheli.