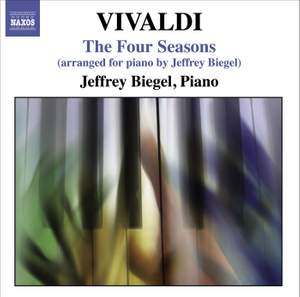 Vivaldi - The Four Seasons (arranged for piano by Jeffrey Biegel)

Biegel's performances are right on the money and quite transcend the oddity factor, offering a fresh and original take on these much-loved scores. — Gramophone Magazine, October 2009

Vivaldi’s The Four Seasons are among the most popular of Baroque concertos and have inspired musicians to perform them in their original form and in many different guises.

Following the lead given by J.S. Bach when he transcribed a number of Vivaldi’s other concertos for keyboard, this disc presents a sparkling new version of The Four Seasons for solo piano by Jeffrey Biegel.

This is complemented by equally effective arrangements by Andrew Gentile of two of Vivaldi’s other beloved concertos for mandolin and lute.

“Biegel brings a lush sound and elastic sense of rhythm to his interpretations. Architectural shaping of the pieces comes easy to him. His unself-conscious and seemingly effortless expression has a broad and appealing range, without resorting to the maudlin. His balancing of textures brings out the many melodic strands and harmonic treasures. The technical demands do not hinder him, do not call attention to themselves or him. This release rewards the listener on many levels.” American Record Guide

Biegel's performances are right on the money and quite transcend the oddity factor, offering a fresh and original take on these much-loved scores.