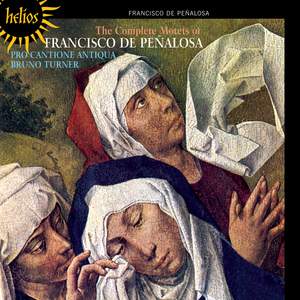 'Among the singers in our chapel on solemn occasions is our beloved son, Francisco de Peñalosa … musician extraordinary (who) displays such exquisite art … that we fervently desire his continuing presence.' Pope Leo X, 4 November 1517 (in a letter to the Cathedral Chapter of Seville)

Under strong Flemish influence, Spanish composers of real quality and pronounced character emerged at the end of the fifteenth century, associated with the royal chapels of Ferdinand and Isabella and with the choirs of the great cathedrals, notably Toledo and Seville. Francisco de Peñalosa shares pre-eminence with some fine contemporaries such as the Basque Juan de Anchieta, the Portuguese Pedro de Escobar and the dramatist and secular composer Juan del Encina. This was a period when increasing numbers of Spaniards were recruited to the Papal Choir, many, but not all, being notable falsettists.

Peñalosa was born probably in 1470 and almost certainly at Talavera de la Reina, near Madrid. The earliest document referring to him is dated 11 May 1498 when he was accepted as a singer in the chapel of Ferdinand V of Aragon; in 1511 he was appointed maestro de capilla in the household of Ferdinand’s grandson. He became associated with the Cathedral of Seville by the gift of a ‘benefice canonry’. But this was to cause intermittent trouble due to long absences to which the Seville Chapter objected, despite even the Pope’s requests for tolerance of a prolonged period in Rome. Peñalosa certainly visited Seville in 1516 after Ferdinand’s death, but was in Rome from 1517 until 1525 when he returned to Seville. There he was at last in residence and actually became Cathedral Treasurer, a position held until his death. He lies buried close to Guerrero in the Cathedral’s chapel of La Virgen de la Antigua. An inscription reads:

Here lies the very illustrious Francisco de Peñalosa, Archdeacon of Carmona and canon of this cathedral church, who died on April 1st 1528.

None of Peñalosa’s music survives in Roman sources and most is preserved in Hispanic or Portuguese manuscripts; the majority of works can be found in books that can be associated with the Aragonese royal chapel. It is reasonable to suppose that the considerable body of his music—six Masses, six Magnificats, sets of Lamentations, various Mass movements, Office hymns and a variety of motets—dates mainly from an active composing period of some twenty years in Aragonese court circles.

Cristóbal de Villalón, writing in 1539, claimed that not only did Peñalosa’s skill exceed that of Apollo, the ‘inventor of music’, but also that of the celebrated Josquin Desprez (d1521). Tess Knighton has remarked that, although such arguments are hardly impartial in themselves, it was indeed Peñalosa, of all the Spanish composers of his generation, who came closest to Josquin’s style and technique. Peñalosa’s motet Sancta mater istud agas was accepted as Josquin’s until recently. This brings us to a problem which must be faced.

Peñalosa’s motets are counted as twenty-two up to thirty in number by various authorities in different works of scholarship and in reference books. The surviving manuscripts, mainly kept now in Tarazona, Toledo, Barcelona and Coimbra have a considerable number of conflicting attributions or none at all. The modern Spanish edition (Opera Omnia, Vol 1, Madrid, 1986) gives credit to Peñalosa for all the motets that have any attribution or other likelihood of being his. Thus he is given Brumel’s Mater Patris, Compère’s O bone Jesu and Anchieta’s Domine Jesu Christe, qui hora diei ultima. A doctoral dissertation by Jane Hardie (University of Michigan, 1983) makes the number of motets twenty-seven. The Mapa Mundi editions by Tess Knighton and Martyn Imrie (1988 and 1990) have been more critical of attributions and of internal stylistic evidence. Thus the present recording offers twenty-two motets of which a very few may still be doubtful. With some regret, the often attributed Memorare piissima is omitted because Knighton, Imrie and Turner are all convinced it is by Escobar. The twenty-two certainly stand as a convincing testimony to the personality and subjectivity projected by a composer of character and one possessed of experimental techniques. These mark him as influenced by the French and Flemish, notably Josquin, but with an undoubted distinction of his own.

These motets—some with liturgical texts (for instance Pater noster and Ave Regina), others devotional like Adoro te, extra-liturgical funerary, such as Versa est in luctum, ‘over-the-top’ late medieval hyperbole (O Domina sanctissima), exaggerated bloodiness (Precor te)—all twenty-two of them, have not a note of lively rejoicing. Yet, within each, even the very few that are a little dull and awkward, there is a tremendous variety. The textures and sonority, the mixtures of sharp declamation, soft slow chords and soaring melismas are varied endlessly and mixed from piece to piece and often within an individual motet. Many are based on plainchant melodies, sometimes paraphrased or even literally quoted in one voice, sometimes fragmentarily or by motivic allusion; a few are freely composed. Always, expression is sought rather than contrapuntal wizardry.

The final motet in this recording (Transeunte Domino Jesu), a conflation of Gospel narratives, uses one utterly simple melodic scrap to extraordinarily expressive effect, repeated in a most un-mechanical way. The masterly Versa est in luctum exploits harmony and melody so that one voice or another dominates momentarily with what seem like heartfelt outpourings of grief. A century before Victoria’s or Lobo’s versions this funeral motet is full of that strange mixture of dignity and passion that glows through Spanish church music in the works of Morales, Guerrero and the hundreds who are less known.

The light and delicate touch which Peñalosa brings to his Marian/Song of Songs miniatures in three voice parts is deft in airy polyphony with flowing lines. In contrast, Ave verum corpus is entirely composed in plain chordal blocks.

Some of Peñalosa’s motets are settings of familiar liturgical texts or prayers, but many are of a type that was to be largely condemned and swept away in the tide of reform ordained by the mid-sixteenth-century Council of Trent. The rather gory dwelling upon the details of the Passion will strike those who know the English (vernacular) pre-Reformation Passion carols such as Woefully arrayed (Cornysh and Browne), noting the similarity to Peñalosa’s Precor te, Domine.

Great numbers of devotional books—horae, Books of Hours—were produced cheaply and widely distributed at the end of the fifteenth century in Spain. They were devoted to Marian, Eucharistic and Penitential subjects. The recently canonized (1482) St Bonaventura (d1274) was an enormous influence throughout Europe with his extravagant and subjective writings which included his Officium de Passione Domini. The scene at the foot of the Cross haunted the imagination of Christians in Peñalosa’s time.

This recording is an anthology, and it is recommended that it is sampled rather than always heard end to end. We have only ordered the works so as to give a variety of voice combinations and of subjects—Penitential, Eucharistic-devotional, Marian, Christ’s Passion, and so on—in groups. It is more than worthwhile, actually essential, to read the texts and translations at least once when getting to know these extraordinary pieces.

As to performance, we should be wary of dogmatic pretentions to an ‘authentic’ solution. Ideally, one would like to have some of the motets performed with a few boy choristers above the tenors and basses and others by a choir with several voices to each part. Instrumental involvement in music such as this was certainly known in Spain. But the one certain and most frequent medium for the rendition of this music was the skilled group of adult male singers, often with one voice to a part.

In presenting this corpus of motets by Spain’s greatest composer of sacred music around 1500, we, the producers and editors of his music for this recording, hope to have revealed a hidden treasure of great value.

Thanks are due to Tess Knighton and Martyn Imrie for their editions and for derivations from their introductions which I have absorbed into the notes. Those who have been involved are also deeply grateful to Professor Robert Stevenson, whose inspiration and immense knowledge have always been at the back of all their efforts in promoting Peñalosa’s music. His book Spanish Music in the Age of Columbus (The Hague, 1960, repr. 1964) remains fascinating and useful beyond compare.