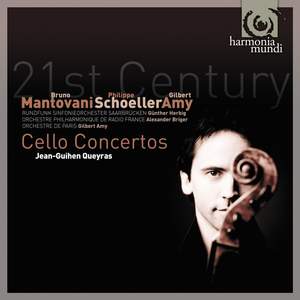 Schoeller: The Eyes of the Wind

Three composers, three masterworks of our time, performed by three orchestras - and a central figure, the moving spirit behind this fine project devoted to the concertante cello: Jean-Guihen Queyras, voted Artist of the Year 2008 in Diapason.Three sometimes very different, yet at the same time highly complementary ways of conceiving the concerto in the 21st century. Long a soloist with the Ensemble Intercontemporain, Jean-Guihen Queyras was profoundly influenced by working with Pierre Boulez. His discography, distinguished by a musical eclecticism, includes works by Haydn (on period instruments) as well as Dvorák and 20th-century composers.

In all three pieces, Queyras is wonderfully committed.

While inhabiting diverse worlds of sound, these three cello concertos share a common thread in the refined, comprehensive artistry of Jean-Guihen Queyras. The Canadian-born Frenchman has come to the fore as a versatile cellist, persuasive in the Classical and Romantic repertoire as much as in the modern milieu he experienced as a member of the Ensemble Intercontemporain. Whether in the emphatic drama of Bruno Mantovani’s Concerto of 2003, the more rarefied atmosphere of Philippe Schoeller’s The Eyes of the Wind (premiered in 2005) or the multifaceted athletics of Gilbert Amy’s Concerto (which was completed in 2000), Queyras draws out the character and colour of each piece in the most compelling way.