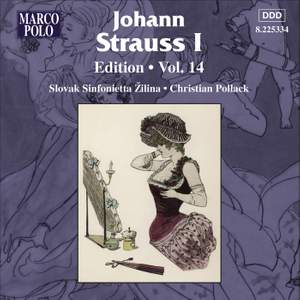 In a career that spanned a period from the 1820s until his death in 1849, the older Johann Strauss established an unrivalled position for himself among composers and performers of dance music in Vienna.

This fourteenth volume in Marco Polo’s ongoing Johann Strauss I Edition presents several waltzes from the early 1840s, including Die Tanzmeister, first performed at the Katharine Ball at the Sperl on 24th November 1841, Stadt und Landleben, first performed at a garden festival at the Sperl on 5th July 1841, and one of Strauss’ most popular pieces, the Beliebte Annen-Polka, written in honour of the Empress Maria Anna.