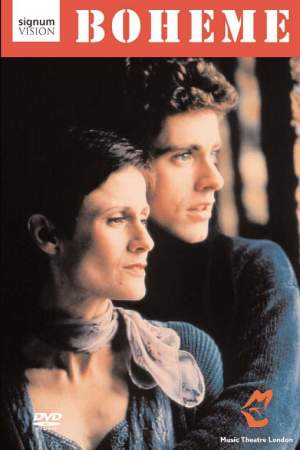 Writer/Director Tony Britten's version of Puccini's La Boheme is a ground breaking new take on an opera classic. Utilising actor/singers and a funny but hard-hitting script, the film seeks to achieve the sort of accessibility that Music Theatre London is renowned for in the theatre. Four young men, an artist, a playwright, a musician and a live in the 'Withnail' - like squalor of booze, dope and bad behaviour. Into this world enters the mysterious Mimi. She and the playwright, Rudolfo, fall in love and everything has to change. Rudolfo's immaturity is reflected in obsessive jealousy, and failure to notice Mimi's drug problem.The lovers part, and only when Mimi comes back to the squat to die, does Rudolfo comprehend the depths of his love, and the boys realise that growing up is violent and irrevocable. The basic idea behind Music Theatre London started as a conversation between Nicholas Broadhurst and Tony Britten whilst they were working as Staff and Musical Directors, respectively, for The National Theatre's Guys and Dolls in 1985.They discovered a shared passion about finding a means of de-mystifying opera. Putting these ideas into practice they organised a workshop of The Marriage of Figaro, presenting it as a music drama with actor-singers, and concentrating on re-establishing the importance of the text by experimenting with a new and colloquial translation. Successful productions of Don Giovanni, Cinderella, La Traviata [nominated for a Laurence Olivier Award for Outstanding Achievement in Opera], Cosí and the Magic Flute followed; the Covent Garden Festival commissioned a new production of Die Fledermaus for its 1998 season and in November.The film version of La Boheme was shot on location in South-east London, nominated for an RTS award, and the Prix Italia, before being bought and broadcast by Channel 5.