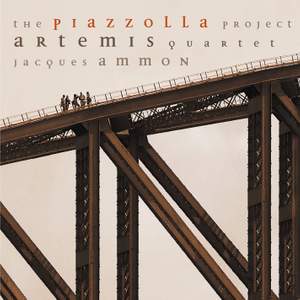 "Estaciones Porteñas", a vivid portrait of the four seasons as experienced in Buenos Aires, may prove to be his most enduring composition, duly rendered with restrained elan here. — The Independent, 19th June 2009

Berlin meets Buenos Aires and it takes five to tango as the Artemis Quartet takes to the floor with Chilean pianist Jacques Ammon for a programme of works by Argentinian legend Astor Piazzolla.

It is perhaps no surprise that Crescendo magazine, reviewing the Artemis Quartet’s recent Virgin Classics CD of Schubert’s C major Quintet with Truls Mørk, said that the performance “could not be highly enough praised“. Perhaps more unexpected is that the Berlin-based string quartet has now joined forces with the Chilean pianist Jacques Ammon for a programme of music by Astor Piazzolla (1921–1992), the Argentinian master of the tango.

Eckart Runge, the Artemis‘ cellist, has in fact been collaborating with Ammon over the past decade to create celloproject, a duo playing the music of Piazzolla, his predecessor Carlos Gardel, and composers from the worlds of jazz (such as Chick Corea) and film (such as Charlie Chaplin and Nino Rota). As Runge says: "In the mid-1980s, when I first heard the music of Astor Piazzolla, little known in Europe at the time ... it was like being struck by lightning. With its almost cruelly shattering immediacy -- reminiscent of Schubert, somewhere between dream-like beauty and deathly sadness – and a refined subtlety between joy and tears, reminiscent of Chaplin, it moved me deeply. Only some years later did I dare to play this music for myself for the first time. Immediately I began to do my best to bring together everything I could find out about this music and its history, and consequently visited Buenos Aires.“

Although tango is understood as a ’popular‘ rather than classical genre, Piazzolla studied with the famed composition teacher Nadia Boulanger and his musical collaborators over the years included figures from jazz and popular music – for instance the saxophonist Gerry Mulligan, the vibraphone player Gary Burton and the Italian chanteuse Milva – and classical musicians such as Salvatore Accardo, Mstislav Rostropovitsch and the Kronos Quartet. His output includes orchestral works, an opera and an oratorio. Perhaps his best-known work features on this disc, the Estaciones Porteñas (Seasons in Buenos Aires), inspired by Vivaldi’s Quattro stagioni and here performed by a piano trio.

Runge explains: “The idea of the Piazzolla Project was to bring the authentic sonic and expressive palette of the tango to life with the inexhaustible possibilities of the string quartet, the piano trio and the piano quintet. Sometimes melting into the melancholy tones of the bandoneon, sometimes breaking out into the raw heterogeneity of the tango quintet, it represented a completely new encounter with sound, rhythm, style and gesture. It was a pleasure for me to share with my quartet colleagues the experience I had gathered over the years in my engagement with this culture. They were enthused by the depth and variety of the tango. For all of us, this music was a great inspiration and it exercised an enriching influence on our involvement with the classical chamber repertoire.”

"Estaciones Porteñas", a vivid portrait of the four seasons as experienced in Buenos Aires, may prove to be his most enduring composition, duly rendered with restrained elan here.