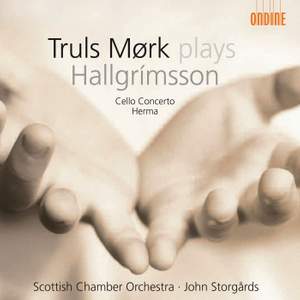 The Mørk projects the close-knit solo writing with his customary finesse, and he is no less insightful in the Cello Concerto (2003) dedicated to him. …the Scottish Chamber Orchestra… respond... — Gramophone Magazine, August 2009 More…

The celebrated Norwegian cellist Truls Mørk is known as a tireless champion of the very best contemporary music. In this release, he showcases the Icelandic composer Hafliði Hallgrímsson, himself a professional cellist, with his two works for cello and orchestra.Truls Mørk is joined by the forces of the Scottish Chamber Orchestra, one of the finest ensembles of its kind, under the direction of John Storgårds.This CD includes the first commercial recording of the Cello Concerto, which Hallgrímsson dedicated to Mørk in 2003. Ever since, he has championed the work in a number of performances across Europe to great acclaim. Truls Mørk, a committed performer of contemporary music, has championed the cello concertos of Henri Dutilleux, Pavel Haas, Hafliði Hallgrimsson, John McCabe, Krzysztof Penderecki, Matthias Pintscher and Lasse Thoresen. The Scottish Chamber Orchestra, formed in 1974 with a commitment to serve the Scottish community, is now one of Scotland's foremost cultural ambassadors. It tours regularly in Europe, the Far East and the USA and is recognised for its innovatory approach to music-making and programme-planning. It appears regularly at the BBC Proms and the Edinburgh International, St Magnus, Cheltenham and Aldeburgh Festivals.

The Mørk projects the close-knit solo writing with his customary finesse, and he is no less insightful in the Cello Concerto (2003) dedicated to him. …the Scottish Chamber Orchestra… respond with alacrity to the assured direction of John Storgårds. Excellent sound and decent notes help make this a disc worth investigating by those who have enjoyed Halgrímsson's understated individuality.

Mork revels in the lavish solo writing, while Storgards elicits from the Scottish Chamber Orchestra playing of the highest order.

What might a cello concerto by an Icelandic composer be like? Melancholy and brooding, with flecks of light like sun on a cold sea? If that’s your expectation, this CD will not disappoint...Mørk’s cello playing, delicate yet forceful, is a treat in itself.