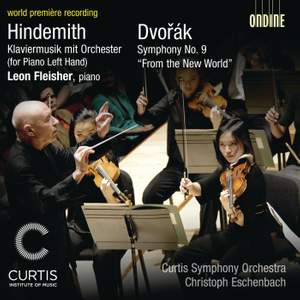 The Klaviermusik, in essence a four-movement concerto, proves to be no mere curiosity but vintage Hindemith of its period… Leon Fleisher, who not so long ago regained the use of his right hand... — BBC Music Magazine, May 2009, 4 out of 5 stars More…

Ondine is proud to announce the first ever commercial recording of a long lost major work by Paul Hindemith, the Klaviermusik mit Orchester for piano left-hand and orchestra. The New York Times has called it, "a fantastic work that requires tremendous technique and stamina."

Hindemith wrote this concerto in 1923 for the one-armed pianist Paul Wittgenstein. Wittgenstein never performed it and it was only upon the death of his widow in 2002 that the piece was discovered in a farmhouse in Pennsylvania. It received an acclaimed 2004 world première in Berlin, with piano legend Leon Fleisher as soloist together with the Berlin Philharmonic under Sir Simon Rattle. Leon Fleisher, one of the most prominent specialists of left-hand repertoire, is also the soloist on this recording. The Curtis Institute of Music expresses its deep appreciation to the Neubauer Family Foundation, which has made possible and underwritten this recording of the Curtis Symphony Orchestra.

Renowned pianist, conductor and teacher Leon Fleisher had made numerous benchmark recordings, including the piano concertos of Beethoven, Brahms, Grieg, Schumann and Rachmaninov, when, in 1965, two fingers of his right hand became immobile. He was forced to retire when only 37 years old.This was the defining moment in his career until the late 1990s, when he began botox treatments that finally helped relieve the neurological affliction known as 'focal dystonia.' Fleisher has been playing infrequently with both hands again and in 2004 made his first two-hand recording in 40 years. In the intervening years he followed two parallel careers - as conductor and teacher - while learning to play the extensive but limiting repertoire of compositions for piano left-hand.

Held in high esteem by the world's foremost orchestras and opera houses for his commanding presence, versatility, and consummate musicianship, Christoph Eschenbach has also been acclaimed for his creative insight and dynamic energy, as a pianist, conductor and ardent champion of young musicians. Herbert von Karajan was his mentor for nearly 25 years and he credits him as having had a tremendous influence on his development as a conductor. In autumn 2010, he will assume the music directorship of the National Symphony Orchestra and the specially created position of music director of the John F. Kennedy Center for the Performing Arts, both in Washington, D.C. Eschenbach has had a long and continuing association with the Curtis Institute of Music, working closely with its conducting, composition, and general student body, as well as conducting the Curtis Symphony Orchestra on a regular basis, an orchestra about whom the Philadelphia Inquirer acclaimed "… any city would be lucky to have as its professional ensemble". The Curtis Institute of Music trains exceptionally gifted young musicians for careers as performing artists on the highest professional level. One of the world's leading music schools, Curtis provides full-tuition scholarships to all of its 162 students, ensuring that admissions are based solely on artistic promise.

The Klaviermusik, in essence a four-movement concerto, proves to be no mere curiosity but vintage Hindemith of its period… Leon Fleisher, who not so long ago regained the use of his right hand after losing it for many years, is the appropriate, highly agile soloist. The orchestra, too, copes well with Hindemith's spare but relentlessly busy scoring, including a large percussion battery.

The Klaviermusik is a typical example of the Hindemith of the 1920s in his neoclassical style, ending with a chatteringly energetic finale - attractive enough if undemanding.

Eschenbach's reading of the New World is comparatively small-scale, with some lovely wind solos...[He] favours a very plain approach…The coupling, however, is fascinating

This live recording is its first outing on disc - and if you care remotely about Hindemith, you will be angry that it has been suppressed for so long. The outer movements are examples of his abrasive early modernism at its finest. The slow movement, meanwhile, is a wonderful mix of Bach and blues, in which the piano picks out a stark counterpoint to a succession of woodwind solos over a pizzicato walking bass.

Leon Fleisher, who until recently suffered from a neurological condition that disabled his right hand, gives a dynamic performance of the solo part, and the Curtis Symphony Orchestra contributes energy and piquant colour.

It’s very much of the 1920s, but the mighty Fleisher makes the exhumation bracing...the orchestra supplies passion and the conductor Christoph Eschenbach has his sensitive moments.