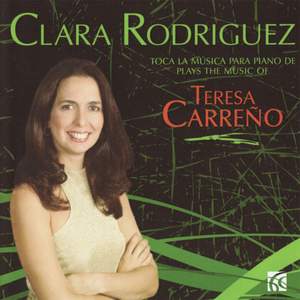 …Carreño is very much her own woman: try the extended Ballade (7'22"), the two touching Elegies, Un rêve en mer and le sommeil de l'enfant. Such music needs an empathetic spirit to show it to... — Gramophone Magazine, September 2009 More…

Teresa Carreño came from a distinguished Venezuelan family, proudly connected to Simon Bolivar. At the age of eight Teresa gave her debut recital inNew York, going on to perform in all major halls of the USA and Europe. She was showered with praise from music critics and won the admiration of the greatest musicians of the time, including Rossini, Liszt, Grieg, Gounod and Rubinstein. One of her earliest compositions was also written at the age of eight and was dedicated to her mentor Louis Moreau Gottschalk. She composed up to 70 works for the piano most of which were written and published in Paris when she was only a teenager.

Clara Rodriguez was born in Venezuela and after winning a scholarship from the Venezuelan Arts Council trained in London at the Royal College of Music under Phyllis Sellick. Clara Rodriguez’s career as a concert pianist has taken her to perform in the most prestigious halls in Europe, South America, Asia and the North of Africa. Her discography includes the piano music of Moisés Moleiro; Federico Ruiz; Teresa Carreño; Federic Chopin; Ernesto Lecuona and Popular Venezuelan Songs and Dances.

“The Venezuelan Teresa Carreño (born in Caracas 1853; died in New York 1917) was, with Clara Schumann, the most celebrated female pianist of the 19th century. Most of these works are self-evidently morceaux for the salon, but superior specimens of the genre, requiring a pianism above the ordinary and showing a complete technical command. Clara Rodriguez is a sympathetic and enthusiastic interpreter; her touch is sure and agile. She invests all this highly agreeable music with vibrant life. This recording is superb” Pianist Magazine, Selected Discs, London

…Carreño is very much her own woman: try the extended Ballade (7'22"), the two touching Elegies, Un rêve en mer and le sommeil de l'enfant. Such music needs an empathetic spirit to show it to its best advantage and Clara Rodriguez, Venezuelan herself, provides it with performances of alluring vivacity allied to that most essential of requisites in this type of repertoire - charm. Highly recommended.