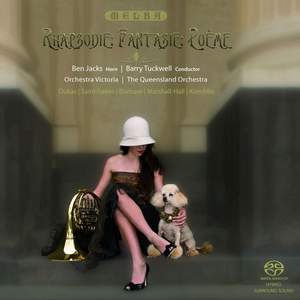 Music for Horn and Orchestra

An exciting recording of French and Australian works for horn and orchestra featuring one of Australia’s most acclaimed soloists, BEN JACKS, Sydney Symphony Principal Horn, performing with ORCHESTRA VICTORIA, and THE QUEENSLAND ORCHESTRA, led by distinguished conductor BARRY TUCKWELL, the greatest horn soloist of his era.

The title track Rhapsodie, by contemporary French composer, Jean-Michel Damase was commissioned by the famous satirist Barry Humphries for BARRY TUCKWELL and was first performed by him as soloist in 1987. This is the world premiere recording of this work.

Coupled with his career as Principal Horn with the Sydney Symphony, BEN JACKS has a busy solo career performing with symphony orchestras from Adelaide to Chicago, solo recitals, and as a chamber musician.