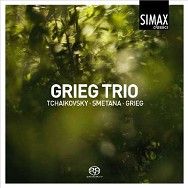 The rich, elegiac vein that runs through the Smetana and Tchaikovsky trios are splendidly externalised in these readings. Both are superbly recorded. — BBC Music Magazine, September 2009, 4 out of 5 stars More…

Since their recording debut in 1991 the Grieg Trio has established itself as one of the leading ensembles in the world, with a number of highly acclaimed releases. Over the years It has performed at all of the world’s great concert venues, including the Concertgebouw, the Schauspielhaus and the Carnegie Hall. It is a regular visitor to London’s Wigmore Hall and has played there many times to great acclaim, most recently on the 23rd of February this year in a programme featuring works by Beethoven, Shostakovich and Brahms. The group’s new release, which includes trios by Tchaikovsky and Smetana, as well as a rarely recorded piece by Grieg, the Andante Con Moto, is being made available as a double SACD hybrid package for the price of one.

Edvard Grieg’s only essay in the genre was completed, according to the date on the manuscript, on 17 June 1878. The Andante Con Moto in C minor is a substantial piece apparently intended as the slow movement of a piano trio, though in fact its contrasts of character and alternation of slow with faster tempi make it an effective single-movement work. It is certainly no sketch or draft but a fully-realized piece in every way, and of a quality comparable to Grieg’s other, better known, chamber compositions.

Bedrich Smetana is one of the most prominent Czech national composers. His piano trio of 1855 was written in memory of his daughter ‘Frizi’, who died of scarlet fever the same year. The work is spontaneous, rhapsodic and deeply personal in its musical character.

Tchaikovsky’s trio Op. 50 holds a special position. The catalyst for this work was the death of the pianist and pedagogue Nicolai Rubinstein. Tchaikovsky stated that it was “a new form of music that I never have written before”. Op. 50 is a highlight in the romantic literature, both in the pure musical sense and because of the fact that the whole piece lasts for more than 46 minutes. The Grieg Trio received the Critics’ Award in 1993 for their performance of this epic piano trio.

The rich, elegiac vein that runs through the Smetana and Tchaikovsky trios are splendidly externalised in these readings. Both are superbly recorded.

The Smetana Trio… receives a really inspired performance. The… Grief Trio identity totally with this music, following its changes of mood with great sensitivity and feeling, and the result is truly memorable in the depth of the players' response, with the pianist often leading in just the right way.

…a splendidly played programme, full of imaginative insights, and Austbø is most naturally recorded.