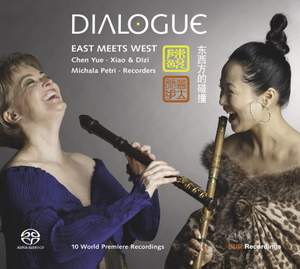 The reali interest of this collaboration lies in the contrast between what the Western and Eastern instruments can do, with the latter capable of an amazing variety of tricks. — BBC Music Magazine, 5 out of 5 stars More…

Gang Chen: The Greeting from Afar

Dialogue - East meets West is the second CD in a series produced by OUR Recordings, entitled East meets West, which as a turning point has the dialogue between the two cultures. The first recording, Spirits - East meets West with Chen Yue, on Xiao and Lars Hannibal, on Guitar was released in April 2007.

After experiencing the beauty of traditional Chinese music and the possibilities inherent in combining Chinese and Western musical instruments, it became clear that another step could be to see what would happen when the recorder and the equivalent Chinese instrument met in - as the Chinese would say - “a friendly encounter”.

Five young Chinese and five young Danish composers were each asked to explore the dynamic possibilities of a cultural encounter - by each writing a duet just for Chen Yue and Michala Petri.

The reali interest of this collaboration lies in the contrast between what the Western and Eastern instruments can do, with the latter capable of an amazing variety of tricks.

Both artists play superbly, and the audio quality is notable... nothing but the natural sounds of the instruments recorded in the flattering acoustic of a Danish church