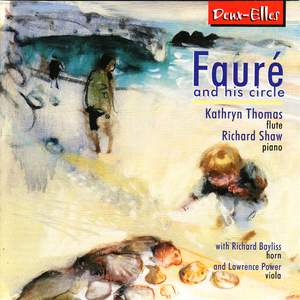 Fauré and His Circle

With the support of the composers Franck, Massenet, Fauré, Duparc and Saint-Saëns, the Société Nationale de Musique was set up in February 1871 to promote its distinctive symphonic and chamber music concerts. This disc presents a selection of music that featured in these concerts, many of which were premiered by France’s leading flautist at the time, Paul Taffanel. Thanks to Taffanel, a tradition of commissioning works especially for these concours began to emerge. At first the commissions were just for the flute competition but very soon, under Taffanel’s influence, new works began to be commissioned for all the wind and brass instruments.

Kathryn Thomas plays with impeccable technique and tuning, neat phrasing, and an attractive tone. Richard Shaw is a sympathetic accompanist, and Lawrence Power's eloquent viola in the Duruflé is a real bonus.

For her debut album, the gifted flautist Kathryn Thomas offers pieces reflective of the late-19th century "Ars Gallica" movement in French music, a rich period for flute composition largely because of the abilities of the virtuoso Paul Taffanel.